In today’s blog, I am speaking directly to you working parents who drive your kids to school, and fight the car rider lines. What happens to you before you get to work can be a foreshadowing of what's actually happening at work, and it impacts your level of emotional intelligence.

Because of our busy lives, it's important for things to go smoothly. The flow of the day has to work in order for all of these pieces to fit together for a successful life and balance. You can have a process all day long, but if the people are not respectful of it, it will be ineffective. I was reminded of this as I was taking my daughter to school on my way to work.

THE CAR RIDER LINES My daughter has been a bus rider all of her young life. Since we are in transition, building a new house and staying temporarily at another location, I’ve had to change my schedule to drive her into school. Every parent who has a car rider knows that you have to fight the car rider lines. If you don't arrive early then you will face long lines waiting for the drop off point. Arriving just in time or afterwards will slow you down. I've also learned that there is a certain respect and courtesy that car rider parents practice. For example, traffic is coming from both ways when entering the parking lot line where parents drop off their children at the door. There is an unspoken understanding that drivers allow each other to take turns to file into the single lane of traffic to the school door. It’s the polite thing to do. This unspoken understanding works well and keeps the traffic moving in an even flow. Every once in a while, a car-rider parent will violate this norm. The parent is so anxious to get ahead that he/she breaks the order, cutting in front of another parent. This normally leaves the offending parent in the middle of the road, blocking traffic and causing tempers to flare because the rule has been broken. It's a testament to that violating parent’s lack of self-awareness and how it impacts other parents. Not only is that parent unaware of his or her impact, but it appears to other parents that that person has a lack of consideration and respect for other people. To make matters worse, the violating parent tends to always look straight ahead, pretending the other car riders don’t exist.

When people feel that they are being “run over” and ignored, this causes an activation of emotional triggers. The “victims” are left to fume over the violation.

On this particular morning, the emotional reactions were palpable. Even though all parents were in their cars, you could feel the tension around this violating parent. Disapproving looks and flying hands in the air expressed their sentiments. Yes, getting out of order and causing a disruption to the flow signaled a flagrant disregard for the car rider norm. Emotional intelligence began to deteriorate.

As a result, it took much longer to get to through the line for all of the parents. Traffic was backed up all the way down a major road. Buses couldn’t get into the school parking lot, and I am sure many people were late to work.

Ironically, the violator didn’t get out of the line any faster. This incident had other effects. When I finally got close to the door, I was third in line when we came to a stop. Usually at this point it's safe for the child to go ahead and jump out of the car and go into the school. I was staring at my daughter and zoning out because I was thinking about the violation of that offending parent. She sat there and stared back at me.

By then, the other two cars had moved on and I had to move up in line. I asked Mackenzie why she didn't go ahead and jump out, and she laughed at me and said, "Mom, I was looking at you to unlock the door because I couldn't get out!" I chuckled.

I totally missed her signal because I was distracted by the norm violation and how I felt like throat-punching that person (which is completely contrary to emotional intelligence). I hugged her and she got out of the car and went into the school and I went about my way. How does this translate at work?

If we think about the car rider process to get into the school, it's similar to emotional intelligence in organizations. You may have some written rules, but most of the cultural rules are unwritten. People are expected to abide by them, respect each other, and show up with emotional intelligence. When a rule is violated, it causes a disruption in relationships and processes with people in that organization. Resentment builds up because of what appears to be a blatant disregard for the consideration of others.

The violator can be seen as a bulldozer who lacks self-awareness and tact. It’s easy to see this person as lacking emotional intelligence while the victim’s own emotional intelligence is challenged. The organization gets distracted by this and loses sight of the business mission. Ultimately, the culture gets backed up.

Do you have an interesting story about Emotional Intelligence (or lack of it)? Let us hear from you at info@schoolofep.com.

Like this blog? Get it regularly through The Bright Bulb Community Newsletter- free articles, resources, and tips for personal and professional development. Sign up here.

Angela Nuttle is an author, speaker, talent remodeler®, and consultant in talent and organizational development. As founder of The School of Executive Presence™, she teaches business people how to show up with executive presence and coaches them to business success. She also works directly with CEOS, Business Leaders, and HR Teams to develop people, potential, and processes that create productive and profitable business environments. 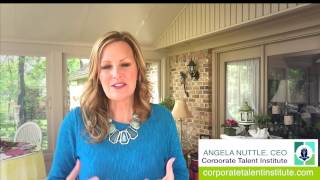